Relax in the countryside

A Very Special Self Catering Experience

"If you asked a child of about seven to draw you a village where a princess lives - they'd probably draw you Fordyce. It's a magical place, a warren of tiny winding streets with its very own fairytale castle." (Visit Scotland)

Fordyce Castle was built in 1592 and is situated in the medieval barony of Fordyce. The village is nestled in rolling countryside but a mere mile from the sea.

Fordyce Castle was built for Thomas Menzies of Kirkhill. He was a wealthy merchant in Aberdeen and provost of Aberdeen in 1588 and 1599. His family were very wealthy and influential and had held the Provostship of Aberdeen for 94 of the previous 100 years. He married Margaret Ogilvie who was the daughter of Alexander Ogilvie of Durne. When Margaret's brother died she inherited the lands and titles of Durne and Thomas became Laird of Durne.

While there is currently no accommodation available for let inside Fordyce castle itself the owners do let Lady Margaret Cottage which is immediately next door to the castle.

The village of Fordyce can trace it's origins back to the 7th century. The celtic saint Saint Talarican established a church and Christian community in Fordyce.

Lady Margaret Cottage - Self Catering Accomodation Scotland, Banff The later 15th century church was built on much earlier foundations. Fordyce Castle is next to the historic kirk and kirkyard.

In 1499 the Kirkton of Fordyce was established as a baronry or burgh by James IV and Bishop Elphinstone of Aberdeen became the first Baron of Fordyce.

While many of the houses in Fordyce are 18th century or later, the houses still follow the old medieval street plan and hence the houses are close together and follow a narrow lane that delightfully winds through the village following the Fordyce burn (stream). The village is well known for its beautiful gardens and in the spring and summer is awash with colour.

From the village there is a public footpath to the sea which is just a mile distant.

Where to stay in Fordyce - Lady Margaret Cottage

A pretty cottage all on one floor furnished to a very high standard and overlooking the castle garden. The cottage has two bedrooms which can sleep up to four although an additional person can be accommodated on request. You can find further details on this cottage by clicking here. 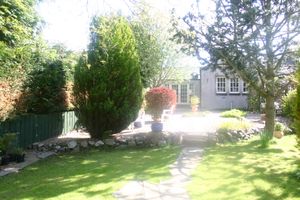